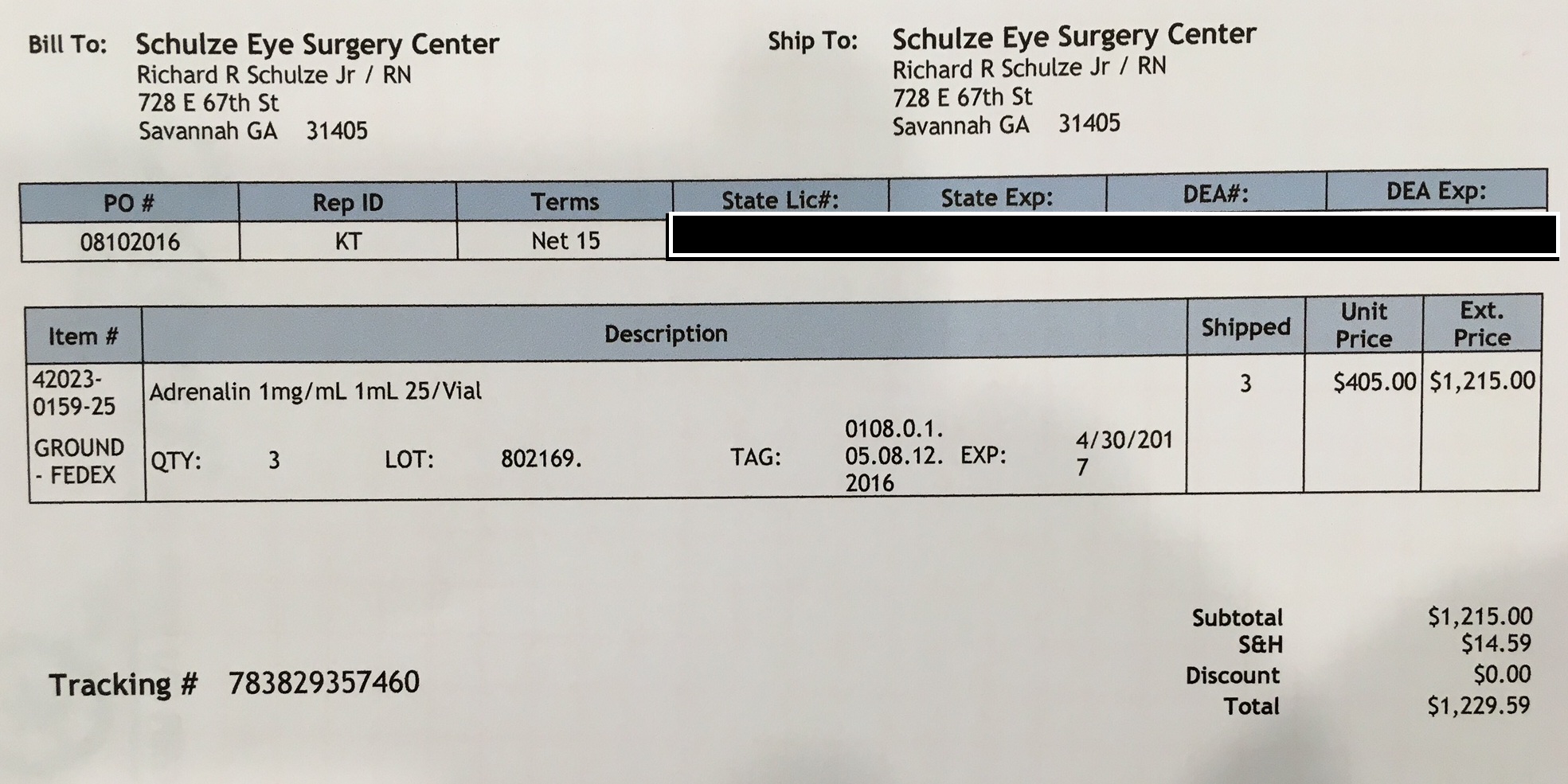 So, here’s the deal with this EpiPen fiasco. A lot of people assume this is due solely to corporate greed and capitalism run amok. Well, that’s not the whole story. Mylen is able to raise the price of an EpiPen to unconscionable levels because excess regulation from the FDA and the government has created nearly insurmountable barriers to entry for other generic manufacturers, thus creating an effective monopoly for Mylen, so they can raise the price to whatever they want. This isn’t capitalism, this is rent seeking: effectively, a government sanctioned monopoly. With true capitalism, there would be effective competition, and in a rational world with true competition you would be able to buy an epi-pen for about 20 bucks.
As an eye surgeon, I use epinephrine every day in surgery. What does it cost me? Well, today, I was signing invoices for my surgery center and came across this invoice for 75 1 ml vials of epinephrine, for which I paid the princely sum of $1,215. Do the math: that’s $16.20 per cc of epinephrine (in fact, until recently, the cost was MUCH lower, but that’s another story). The branded Epipen that sells for $600 is sold in packs of two syringes, each with 0.3 cc of epinephrine, for a total of 0.6 cc. That 0.6 cc amounts to about $10 worth of product, yet it is sold at a markup sixty times higher!
In case anyone wonders, here’s a copy of the invoice pictured below (I’ve blacked out my DEA number and medical license number, since I don’t want my Facebook friends practicing medicine under my license….)
Don’t get me wrong: I’m a capitalist. I want to get rich. But I also want to sleep at night, and I cannot see how we as a society can permit this kind of excess regulation that stifles true competition in medicine and the pharmaceutical industry. My favorite generic manufacturer, Imprimis Pharmaceuticals, may be entering the fray with an affordable, generic epipen soon and I hope this situation will remedied.
Share on Facebook Share
Share on TwitterTweet
Share on LinkedIn Share
Send email Mail